De voorstelling is in het Engels.

The year is 1963 and C.S. Lewis, the famous British author, is hosting a group of American writers at his home near Oxford. They are about to experience a captivating evening with a man whose engaging conversation and spontaneous humor made him one of the great raconteurs of his day.

Seated in his living room and in front of a warm fire he recalls the people and events that inspired his thought and shaped his life: his friendship with J.R.R. Tolkien, why he nearly abandoned the Narnia Chronicles, how he came to embrace Christianity and the American woman who turned his life upside down. 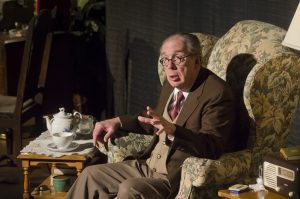 Actor Philip Crowley brings you right into the living room of the author who gave us the Narnia Chronicles.
Set in C.S. Lewis’ home near Oxford, England, Lewis’ guests are treated to an enthralling evening as he recounts the events and people that shaped his life and made him one of the best selling authors of the 20th century. In this 90 minute production viewers will find themselves captivated by a man who, despite becoming a legend in his own lifetime, was most at ease when engaging in exhilarating conversation infused with potent humor. An Evening with C S Lewis sees Lewis at his anecdotal best as he talks about life, friends, family and the American woman who turned his life upside down and who brought unexpected romance into his middle-aged bachelor life.